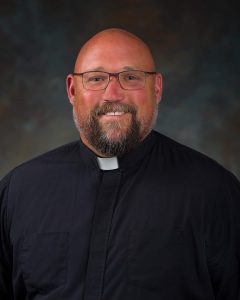 My identical twin brother (Kory) and I were born December 12, 1979 to Craig and Deborah. Not long later my parents divorced and would remarry and I have been blessed with wonderful parents and step-parents. I was raised on the Illinois side of the Quad Cities attending Sacred Heart Parish in Moline and Seton Catholic School. I graduated from Alleman High School and attended the local community college while working.

In prayer before the Blessed Sacrament, I felt called to be a priest during my 3rd year of college. After a year of running from this calling, I finally opened my heart to the gift of this vocation. I entered seminary in 2002 attending Immaculate Heart of Mary Seminary in Winona, MN where I earned my bachelor’s degree. I then went on to major seminary at Mount Saint Mary’s Seminary in Emmitsburg, MD and was ordained a priest for the diocese of Peoria in 2008.

I have been blessed to serve parishes and schools in the areas of Peoria, Streator, and Champaign. I was happily installed pastor of St Patrick Church of Merna and St Mary’s Church in Downs on Easter Sunday of 2017. I am very blessed to be serving these great parishes and our parish school, Corpus Christi Catholic School. 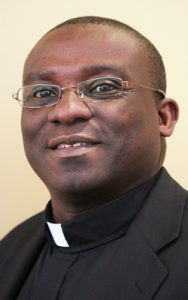 Fr. Martin was born and raised in Nyakishenyi, Rukungiri district, which is in the western part of Uganda, Africa. His parents were very enthusiastic about living their Catholic faith, and he knew from a young age that he was called to the priesthood.

Fr. Martin studied philosophy at St. Thomas Aquinas National Major Seminary in Katigondo, Masaka, Uganda as well as theology at St. Mary’s National Major Seminary in Ggaba, Uganda. He was ordained a priest on July 28, 1996. Fr. Martin then continued his studies, receiving a Licentiate Degree of Canon Law, Master’s Degree in Religious Studies, and a Doctorate in Canon Law, all from the Catholic University of Leuven in Belgium.

Fr. Martin was inspired by priest-missionaries who served in his home parish in Uganda to be willing to serve as a priest wherever there is pastoral need. It was for this reason that when a need arose to serve in the Peoria Diocese, thousands of miles from his home, that he did not hesitate to answer the call.

We are blessed to have Fr. Martin at St. Patrick Church of Merna, and he inspires all of us with his commitment and joy!

We use cookies on our website to give you the most relevant experience by remembering your preferences and repeat visits. By clicking “Accept”, you consent to the use of ALL the cookies.
Cookie settingsACCEPT
Manage consent

This website uses cookies to improve your experience while you navigate through the website. Out of these, the cookies that are categorized as necessary are stored on your browser as they are essential for the working of basic functionalities of the website. We also use third-party cookies that help us analyze and understand how you use this website. These cookies will be stored in your browser only with your consent. You also have the option to opt-out of these cookies. But opting out of some of these cookies may affect your browsing experience.
Necessary Always Enabled
Necessary cookies are absolutely essential for the website to function properly. These cookies ensure basic functionalities and security features of the website, anonymously.
Functional
Functional cookies help to perform certain functionalities like sharing the content of the website on social media platforms, collect feedbacks, and other third-party features.
Performance
Performance cookies are used to understand and analyze the key performance indexes of the website which helps in delivering a better user experience for the visitors.
Analytics
Analytical cookies are used to understand how visitors interact with the website. These cookies help provide information on metrics the number of visitors, bounce rate, traffic source, etc.
Advertisement
Advertisement cookies are used to provide visitors with relevant ads and marketing campaigns. These cookies track visitors across websites and collect information to provide customized ads.
Others
Other uncategorized cookies are those that are being analyzed and have not been classified into a category as yet.
SAVE & ACCEPT